Countdown to 2014 Winter Olympics – the Mascots 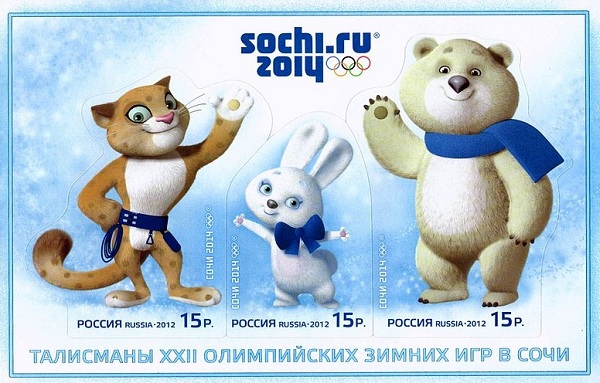 If you like зимние виды спорта (winter sports), then you are already looking forward to the next year’s Winter Olympics. As you know, the Games will take place in the Russian курортный город (resort town) of Сочи (Sochi) on the shores of Чёрное море (the Black Sea).

Each Олимпиада (the Olympics) has its own талисман (mascot). It so happened that the Sochi Olympics have not one, but три (three) mascots. Why? Turns out, it was a nation-wide popularity contest and, in the spirit of athletic competitions, top three winners took пьедестал почёта (the winners’ stand). As a result, we have Белый Мишка (the Polar Bear), Зайка (the Hare) and Леопард (the Leopard) as 2014 Olympic mascots.

Note that the first two mascots, the Bear and the Hare are called by their diminutive Russian names – мишка instead of медведь and зайка instead of заяц. Russians use diminutives a whole lot and for various reasons, in this case to convey cuteness and friendliness. For some reason, the Leopard was left alone and no cute diminutive was applied to him. But if you are wondering, it would have been Леопардик.

While every Russian child will tell you that the words “медведь” and “леопард” are masculine, whether in diminutive form or not, “зайка” can be rather ambiguous. Without applying diminutive, the case is crystal clear – заяц is a he-hare while зайчиха is a she-hare. But зайка can be both! The only way to tell for sure is either by looking at adjectives or verbs that relate to зайка or from the context.

Here’s a classic nursery rhyme about a little girl who forgot her toy bunny on a playground:

(Little Missy Scatter-Brain
Once left the bunny in the rain.)

Here we know that зайка is a he because of the masculine form of the verb остался (as well as from the fact that the illustrations show him wearing red bow-tie or red shorts). If this was a she-bunny, the verb would change to осталась.

On the other hand, a woman might call her boyfriend or husband зайка as in

To which the said boyfriend or husband might reply with Знаешь, зайка, я дико устал. (But honey-bunny, you know, I’m dead tired)

Well, the Sochi Зайка is definitely a girl. We know because each mascot has a bit of a биография (biography)  that includes the winter sports they like, what they do for fun and other trivia that sounds a bit like a personal ad.

Леопард is the most hip of the three. After all, he is a wonderful сноубордист (snowboarder). But he is also an отважный горный спасатель (courageous mountain rescuer) and an альпинист (mountaineer).

The word альпинист (mountaineer) is an excellent example of how you can form nouns to describe athletes in different виды спорта (sporting events). You just need to add -ист to the root for men and -истка for the women:

As is often the case with learning Russian language, there are lots of exceptions from this naming convention:

So back to the mascots. Now we know that the Leopard is a snowboarder. The Bear is, as you’ve probably guessed a лыжник (skier), конькобежец (an ice-skater), but also dabbles in керлинг (curling) and бобслей (bobsleigh). As for Зайка, she is said to be very involved in winter sports, especially in фигурное катание (figure skating) and танцы на льду (ice-dancing).

Lest you think the Sochi Olympic mascots are all brawn and no brain, consider this:

Леопард (Leopard) splits his time between тренировки (workouts), чтение (reading) and медитация (meditation). He monitors the weather in the mountains and knows метеорология (meteorology).

Unlike her overachieving friends, Зайка (Hare) seems to be a laid-back teenager. She spends all her free time waiting tables at her family’s restaurant and chatting with friends on social networks. What’s up with that?

By the way, you can find out more about the three Olympic Games mascots as well as the two Paralympics mascots by visiting their virtual Дом Талисманов (Mascots’ Home).